‘No wins on the board yet’: State Department’s dismal record under Tillerson

US Secretary of State Rex Tillerson has sent a morale-boosting message to America’s demoralized diplomats: Don’t worry about Washington’s endless succession of foreign policy disasters, the State Department will enjoy some “quick wins” in the near future!

Speaking at the US Embassy in Brussels, currently without a US ambassador, the oil executive-turned US chief diplomat conceded that “while we don’t have any wins on the board yet,” Tillerson said the State Department is nonetheless “in a much better position to advance America’s interests around the world than we were 10 months ago.”

Tillerson reassured his underlings that some “quick wins” for the State Department were on the horizon, amid speculation that Trump intends to give him the boot. To be fair, Tillerson inherited a diplomatic nightmare from the Obama administration, but there has not been much improvement since – to put it mildly.

1. One tweet away from starting nuclear war with North Korea for no reason whatsoever

Is the Trump administration’s North Korean bloodlust (usually exhibited in 140 characters or less) an elaborate ploy to deploy more THAAD missile defense systems to South Korea, in order to “contain” China and Russia?

Or is the completely unnecessary Korean crisis simply an easy way to scare the dickens out of an already hopelessly distracted, easily terrified American populace, boosting network news ratings and keeping complaints about the 20 percent child poverty rate to a minimum? Nobody knows. What we do know, is that Tillerson has had a heck of a time trying to turn Trump’s insane tweeting into a reasonable, not-completely-asinine position on Pyongyang’s nuclear program.

Trump famously chided Tillerson in October for “wasting his time trying to negotiate with Little Rocket Man.” Uninspired schoolyard nicknames aside, how are you supposed to “do diplomacy” when your boss gets on your case for “trying to negotiate?” Poor Rex.

Russia and China have proposed a so-called “double freeze” initiative, in which Pyongyang agrees to stop testing missiles in exchange for the US cooling its jets (flying kilometers away from North Korea). This proposal is obviously far too reasonable and adult-like for Washington to even consider. 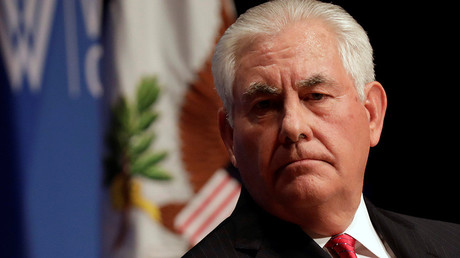 It seems naive in retrospect, but there was actually a brief time in history (circa early 2017) when there was a theoretically possible chance that the US and Russia could enjoy a somewhat-constructive relationship. Of course, the outgoing Obama administration hardly made things easy. As a late Christmas gift to global insecurity, Obama booted 35 Russian diplomats and closed two diplomatic compounds before leaving the White House. Compounded on top of years of stop-the-scary-Russian-bear-from-invading-Europe hyperventilations, Team Trump faced considerable hurdles in restoring US-Russia relations.

But returning the properties that Obama unlawfully seized would have been a good start. Instead, Trump slapped fresh sanctions on Moscow, setting off a tit-for-tat diplomatic row.

Yes, the US and Russia have made modest strides in security cooperation in Syria, but it’s amazing that Tillerson’s State Department has failed, at the very least, to distance itself from the Obama-Clinton Red Scare.

In late October, Tillerson said "the United States wants a whole and unified Syria with no role for Bashar al-Assad in the government." Does that ring the Obama administration’s “Assad must go” bells? Yes, but for now it looks Assad isn’t going anywhere. Russia, Iran and Turkey have emerged as the three guarantors of the Syrian peace process, while the US military has no legal basis for operating uninvited inside Syria’s sovereign territory, which it does. The fact that Assad was not forcibly removed by the US and its proxies basically heralds the end of two decades of post-Cold War US regime change operations.
Bonus: The conflict in Syria has put serious strain on US relations with its NATO ally Turkey.

Although Tillerson has been forced to admit that Iran is in "technical compliance" with the 2015 nuclear deal, he insists that Tehran’s “nuclear ambitions” are a threat to world peace, despite the IAEA repeatedly stating that Iran has remained within the essential limits on its nuclear activities imposed by the 2015 deal with six world powers, the US among them.

According to Tillerson, Iran is destabilizing Iraq (you know, the country that the US invaded – killing, maiming and displacing untold millions). Iran’s efforts in helping to stop jihadists from turning Syria into Libya 2.0. did not impress him either. Сharacterizing Iran as a state sponsor of terrorism might work, but it’s a tough sell when you’re bunkmates with the Saudis.

5. Afghanistan peace process being led by… Moscow, Beijing and Islamabad? 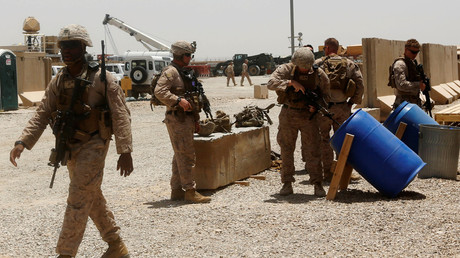 And finally: Afghanistan. After more than fifteen years of poppy-boosting US occupation, peace may finally be upon us – with the help of Russia, China, Pakistan, and a number of other countries, who are trying to clean up America’s mess in Central Asia. “We just felt that these talks – it was unclear to us what the purpose was,” US State Department spokesman Mark Toner said in April, in explaining Washington’s absence at the 11-state Afghanistan peace conference in Moscow.

Russia says it wants to prevent instability from spilling into neighboring nations. But US officials reportedly say Moscow’s efforts are undermining NATO’s democracy-spreading mission. By the way, Washington is now doubling down on Afghanistan – again. In August, Trump announced his administration’s new strategy, saying Americans troops are in Afghanistan to win the war and that there is no timetable for US withdrawal from the country. 3,500 more US troops are being shipped off to the war-torn country. So much for peace!