After winning the Mexico ePrix two weeks ago and finishing third in Santiago, the Panasonic Jaguar driver is the leader of the 2019-20 Driver's Championship. Evans' previous experience of leading the pack came when he won the GP3 series in 2012 and the Toyota Racing Series in 2010 and 2011.While his finishing positions in the Formula E final standings have steadily improved since joining four years ago, sitting atop the standings is a first for the New Zealand racer in the electric series."It's new territory but the whole team's up for it," Evans told CNN Sport's Alex Thomas. "I've been in this position many times of my career, just not in Formula E so I've got experience being the target."Prior to this weekend's race in Marrakech in Morocco, Evans believes it's important to stay consistent on the track rather than making changes if they want to have more success. "We're in a really good position at the moment," he said. "The car's in a great window so that's the number one (priority), keeping the car in it's performing window where everything is operating right, I'm feeling good in it, it's breaking well, it's accelerating well, I've got confidence to carry speed into the corners. "Every track is slightly different, so you do have to modify the set-up and approach to suit the circuit, but we seem to be doing that well at the moment."Marrakech is quite a long circuit with long corners so we've got to keep that in mind and the practice sessions leading up to the vital points of the day, which is qualifying, the race, we've got to just piece together what we need from the car to make sure we're performing well. "We've had good results there in the past and hopefully we can continue our current form this weekend."READ: 'The body and brain is the limit, not the car': On driving the world's quickest Porsche 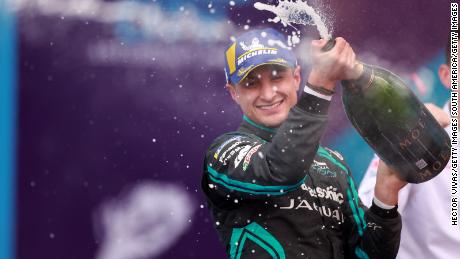 The fruits of labor

For Evans and Jaguar, their rise to the top has been four years in the making. The team made its debut in 2016 and has had a steep learning curve ever since.They didn't achieve any podiums in their debut season though Evans has finished 14th, seventh and fifth in subsequent seasons. "We've been creeping towards the top of the standings since we joined back in season three," the 25-year-old explained. "Last year, we were a contender for the championship right up until the last race but we missed out unfortunately. "It's the first time we've been leaders in the driver's championship, we're second in the constructors' standings. This has been a huge amount of work over the last few years that's finally come together and we're starting to put the pieces together. "Now we're starting to see some really good results on track. It's not been an overnight thing. We've been working towards this for a few seasons now. "We knew we were on a good pathway last year but we wanted to build on that this season and we've started off really well and now it's a matter of keeping it consistent and being composed and not getting too ahead of ourselves."Read More – Source