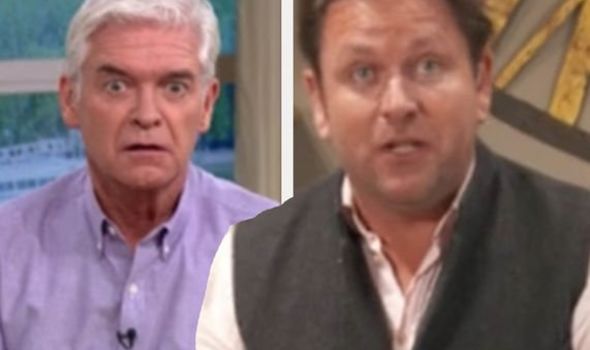 JAMES MARTIN hit out at MasterChef judge John Torrode this week during his segment on This Morning, joining Holly Willoughby and Phillip Schofield just weeks after the judge set fire to his kitchen live on-air.

James Martin not only has his own cooking show, but he also appears as a regular guest chef on ITV’s This Morning. During a live segment which aired earlier this week, James was on hand to chook a welsh rarebit for Holly Willoughby and Phillip Schofield, and the chef narrowly missed out on a blunder occurring. While Phillip started to panic, he reassured those watching at home and took aim at John Torrode instead.

James Martin had been invited to cook for This Morning on Wednesday, not once, but twice with one savoury dish and one sweet.

First up, the chef made welsh rarebit but with fish instead of bread, which is the usual recipe.

This required him to use the grill to get a golden brown top to his cheesy delight.

James explained: “Its a really iconic dish if you look at Gary Rhodes recipe, this one stands out above anything else.

“When it starts to thicken take it off the heat and once it is set, lay it on top of the fish.

James put the fish under the grill, but Phillip very quickly noticed that whenever James opened the grill, there was quite a lot of smoke billowing from the oven.

This sent the host into peels of giggles thinking that lightning had struck twice and they were about to witness another on-air fire.

James opened the oven once more and viewers could see that there were in fact flames coming from the over.

Phillip very calmly pointed out the smoke and James said: “Oh, no, no. Dont panic.”

James just quickly shut the oven door not seeming particularly bothered by what was going on inside.

“Its not John Torrode.” the chef added whilst giving a cheeky smirk to the camera.

He opened the oven door again and another gasp of smoke billowed out and he said once again: “Nah, thats alright.”

It came after MasterChef judge John Torrode also joined Holly and Phillip on This Morning a few weeks ago.

He was showing the viewers how to make a classic DIY McDonalds breakfast for those who have been missing their takeaways in lockdown.

However, in a shocking on-air blunder, John left a tea towel on an open flame in his kitchen and the show was thrown into chaos when John didnt notice.

Those watching at home saw large flames emerge behind him.

The hosts continued to shout, “look behind you,” but the chef remained obvious due to the video link delay.

“Look behind you,” Phillip shouted. “Fire, youre on fire, fire John!”

The MasterChef host calmly turned around, thanked the pair, and moved the burning tea towel to the sink.

He was all ok, but it left Holly and Phillip shaken by the drama of it all.