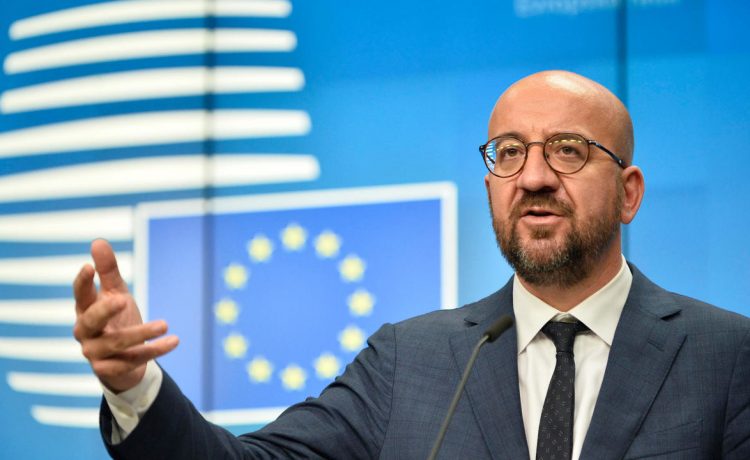 European Union leaders agreed early Friday to impose sanctions on dozens of senior officials in Belarus accused of falsifying presidential election results and leading a crackdown on peaceful protesters, after unblocking a veto against the move by one of the EUs smallest member countries.

In an embarrassing standoff, Cyprus had insisted that its EU partners take action against Turkey for its energy exploration work in disputed waters off the Mediterranean island nations coast before it would agree to the Belarus sanctions.

But after several hours of talks into the night, the leaders agreed on a strong statement of support for Cyprus, as well as for Greece, and a stern warning to Turkey that it could face punitive measures if it continues the undersea drilling work.

“We have decided today to implement the sanctions," European Council President Charles Michel told reporters after chairing the summit in Brussels. “Its very important to do what we decided a few weeks ago,” and to send a signal that “we are credible.”

Michel said that a special written procedure would be launched on Friday to impose sanctions on about 40 Belarus officials.

Belarusian President Alexander Lukashenko "is not on the current list. But we will follow the developments," Michel said. The leader once dubbed Europes last dictator could be added to the list at a later date, should he refuse to enter into talks with the opposition, EU diplomats have said.

The political row has tarnished the EUs image. It is also unusual in that all 27 EU member countries, including Cyprus, reject the result of the Aug. 9 election that returned Lukashenko to power for a sixth term. They all want a new election and agree that sanctions should be slapped on several officials.

Ahead of the summit, Dutch Prime Minister Mark Rutte said “it is bad that we cannot make it work.”

Throughout Thursday evening, the leaders debated what approach to take in the EUs increasingly tense ties with Turkey over its drilling in the Mediterranean Sea, its roles in the conflicts in Libya and Syria, and as a sometimes troublesome source of migrants trying to reach Europe.

In a summit statement, they agreed that if Turkey continues to react positively in talks with Cyprus and Greece the bloc will “launch a positive political EU-Turkey agenda” with trade and customs incentives, and they held out the prospect of more money and benefits for continued cooperation on migrant flows.

If not, the leaders warned, “the EU will use all the instruments and the options at its disposal,” to “defend its interests and those of its Member States.”

“It is now Turkey that has to prove that it wants to go the constructive road with us, and this is the offer tonight. But we are very clear that in the opposite case we have all necessary tools at our disposal,” European Commission President Ursula von der Leyen said.

French President Emmanuel Macron was staunch in his support for his European partners, saying that “solidarity is non-negotiable” when it comes to Cyprus, but also to Greece in its long-running dispute with Turkey.

“When a European Union member state is attacked, threatened, when its territorial waters are not respected, its the dutRead More – Source