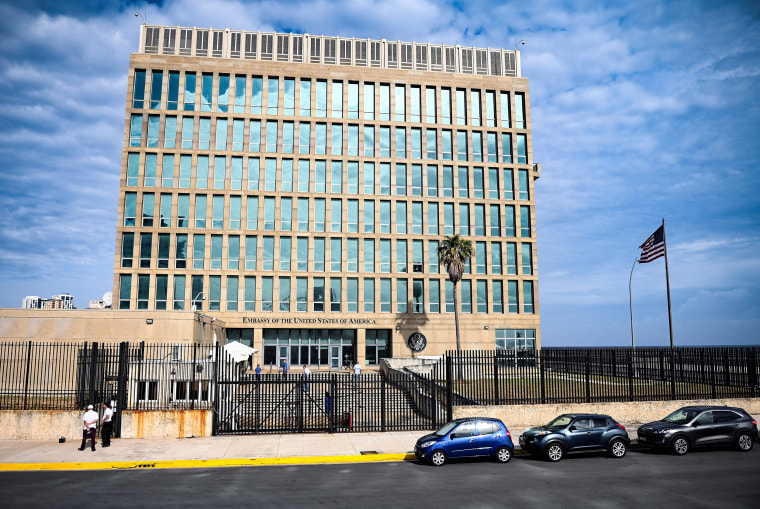 In a new intelligence assessment, the CIA has ruled out that the mysterious symptoms known as Havana Syndrome are the result of a sustained global campaign by a hostile power aimed at hundreds of U.S. diplomats and spies, six people briefed on the matter told NBC News.

In about two dozen cases, the agency cannot rule out foreign involvement, including many of the cases that originated at the U.S. Embassy in Havana beginning in 2016. Another group of cases is considered unresolved. But in hundreds of other cases of possible symptoms, the agency has found plausible alternative explanations, the sources said.
The idea that widespread brain injury symptoms have been caused by Russia or another foreign power targeting Americans around the world, either to harm them or to collect intelligence, has been deemed unfounded, the sources said.

People who have experienced possible Havana Syndrome symptoms and have been briefed on the assessment have expressed deep disappointment, the sources said. Some have pointed out that the CIA’s findings are considered an interim assessment and that they were not coordinated with other agencies, including the Defense Department.

“CIA just kind of struck out on their own,” a person briefed on the findings said.

Nonetheless, almost no one who has been working closely on the issue is surprised that many recent cases of what the Biden administration calls “anomalous health incidents” have plausible explanations unrelated to possible hostile acts. When government agencies began urging any employee who had suffered unexplained headaches and dizziness to report it, it was inevitable that many of the cases would not fit the parameters of what doctors had identified in the diplomats and spies who suffered brain injuries.

“Even two dozen cases is a lot of cases if Americans were attacked,” one person briefed on the findings said.
There is an intensive intelligence gathering and analytical effort to resolve those cases, officials said.

Over the years, many hundreds of U.S. officials have come forward reporting suspected incidents in more than a dozen countries, NBC News has reported.

NBC News reported in 2018 that U.S. intelligence officials considered Russia a leading suspect in what some of them assessed to have been deliberate attacks on diplomats and CIA officers overseas. But in the three years since then, the spy agencies have not uncovered enough evidence to pinpoint the cause or the culprit of the health incidents.

The National Academies of Sciences, Engineering and Medicine said in a report in 2020 that some of the observed brain injuries were consistent with the effects of directed microwave energy, which the report said Russia has long studied.

Russia has consistently denied any involvement.
A team of medical and scientific experts who studied the symptoms of as many as 40 State Department and other government employees concluded that nothing like them had previously been documented in medical literature, the National Academies of Sciences report said. Many reported hearing a loud sound and feeling pressure in their heads and then experiencing dizziness, unsteady gait and visual disturbances. Many suffered long-standing debilitating effects.

But privately, CIA Director William Burns had referred to the incidents as attacks. One of Burns’ aides suffered symptoms during a trip to New Delhi in 2020.

Nonetheless, Burns and the director of national intelligence, Avril Haines, have endorsed the findings, the sources said.

The CIA report aims to address a concern that has grown more intense as more and more cases have been reported: that a U.S. adversary had managed to harm hundreds of Americans in dozens of countries while evading detection by the U.S.

U.S. officials stressed that the interim report was not a final conclusion of the broader Biden administration or the full intelligence community. The White House National Security Council has convened a task force involving outside medical and scientific experts that is also examining Havana Syndrome and is expected to release some findings in the near future, officials said. The Defense Department, the FBI and the State Department are all still working to investigate the origins of the syndrome and how to mitigate it, the officials said.

Instead, the interim CIA report is focused narrowly on the number of incidents that are believed to be potentially attributable to a foreign actor, officials said.

Still, the report marks a significant change of tone from the Biden administration, which has made a point of demonstrating that it is taking the incidents more seriously than the Trump administration did and has repeatedly emphasized the need to take victims seriously. Secretary of State Antony Blinken, in comments on MSNBC last week, recalled having met with State Department employees who have come forward reporting incidents.

“I’ve heard them. I’ve listened to them. You can’t help but be struck by how these incidents disrupted their lives and their well-being,” Blinken said. “We’re doing everything we can to care for them.”

U.S. officials said the CIA report does not change the Biden administration’s broader approach to Havana Syndrome, including the emphasis on eliminating stigma, encouraging employees with suspected incidents to come forward and ensuring proper medical care for those affected.

Brett Kavanaugh Likes Beer, But How Does The Rest Of DC Feel?