Maverick Viñales dodges disaster after jumping off bike at 228 kph 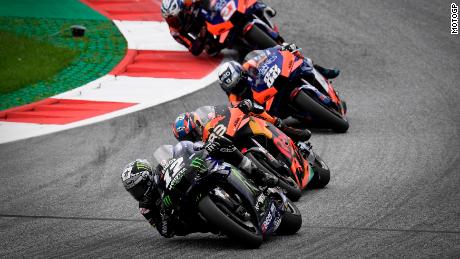 Tearing along the home straight at 228 kph towards turn one of the Red Bull Ring on lap 16, the Spaniard realized that his brakes had completely gone, and he would be unable to stop.Faced with the prospect of crashing off the track and into the safety barriers, Viñales instead elected to jump from his bike, sliding along the track and into the gravel. His Yamaha carried on, slamming into the fences and bursting into flames.

Incredibly, the 25-year-old leapt straight to his feet, looking around in disbelief at what had happened. The race was immediately red flagged, while Safety Officers replaced the damaged air fence.The visibly shaken Yamaha rider was examined by medics and then watched the restarted race from the team box.After the race a still-bewildered Viñales admitted he had been losing the brakes from the fourth lap onwards. "For sure, today's crash was amazing, he told reporters. "I never had that feeling before, where I completely lose the brakes and have to jump off."The previous weekend Johann Zarco's Ducati collided with Franco Morbidelli's Yamaha with the riders racing at full throttle at the Austrian MotoGP. Zarco and Morbidelli were sent flying, while their bikes carried on, becoming potentially lethal projectiles.That both motorcycles missed hitting Yamaha's Valentino Rossi and Viñales was as miraculous as it was extraordinary. Rossi later admitted that the "saint of motorcyclists" must have been watching over him and his teammate. Of Sunday's incident, Rossi described it as a "very scary moment."The cause of the malfunction seemed to be excessive heat in the brakes, a problem that appeared to dog other Yamaha riders during the afternoon, but not to such a dramatic extent."I understand how it happened," Viñales explained, "The brake overheated, but for sure it's not a common problem. Luckily, I'm okay. This is the most important thing."

Movistar Yamaha Team Director Massimo Meregalli promised a full investigation of the brake failure."Maverick had a problem with his bike's brakes (during the race). He decided to keep riding, hoping to salvage some crucial points for the championship, but when he approached turn one without brakes, he had to make the split-second decision to jump off the bike," he told reporters."We are thankful he wasn't hurt, and we will investigate the issue most thoroughly in the coming two weeks."Even without Viñales' incident, this was another race high on drama in a season packed with wild sub-plots.After the restart, Portugal's Miguel Olivera clinched his first ever MotoGP victory, the first by a Portuguese, and the first for the satellite KTM Tech 3 team in its 20-year premier class history. 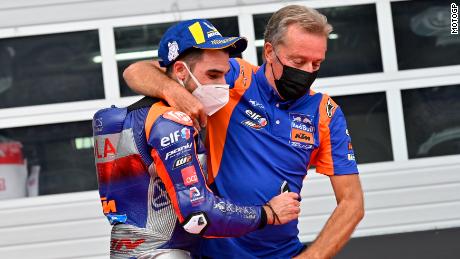 It was a pulsating end to what was the 900th MotoGP contest, with a last corner finish that had race commentators running out of octaves as the riders reached the line.Lying in third approaching the final bend, behind Spain's Pol Espargaro on his Factory KTM, and Australia's Jack Miller on his Pramac Ducati, Oliveira seized the narrowest of opportunities when both riders ran wide, firing his bike past them to take victory as his pit crew erupted in deliriousRead More – Source