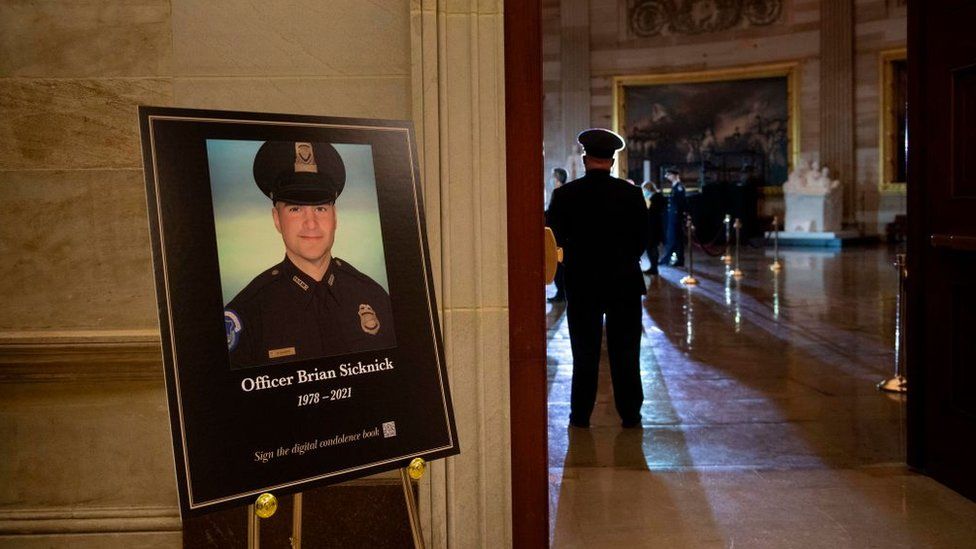 Two men have been charged for using bear spray on a Capitol Police officer who later died after responding to the 6 January riot.

Brian Sicknick was one of five people who died following the riot, but it is not clear if he died from the bear spray – which is like pepper spray.

They were charged with nine counts and face up to 20 years in prison.
The pair were “working in concert and had a plan to use the toxic spray against law enforcement”, according to court documents.

Officer Sicknick, 42, was injured while “physically engaging with protesters” and later died in hospital.

Sicknick lay in honour in the Capitol Rotunda in January – a rare distinction reserved for those who are not government or military officials.

Results from Sicknick’s post-mortem examination are expected on Monday – the same day that Mr Khater and Mr Tanios are expected to appear in federal court.

Investigators used video of the riots to identify the men, allegedly caught on camera discussing the assaults.

According to court documents, Mr Khater was recorded on video asking Mr Tanios for the bear spray at 14:14 local time near the Lower West Terrace of the Capitol, where Sicknick and other officers were standing guard.

Minutes later, Mr Khater is seen on video discharging a canister of the spray into the faces of Sicknick and the other officers, according to the arrest papers.

All three officers were temporarily blinded and incapacitated for more than 20 minutes, investigators said.

Mr Tanios and Mr Khater are charged with nine counts including assaulting three officers with a deadly weapon, civil disorder and obstruction of a congressional proceeding.

Hundreds of people have been arrested in connection with the 6 January siege of the Capitol so far, which led to the second impeachment of former President Donald Trump.