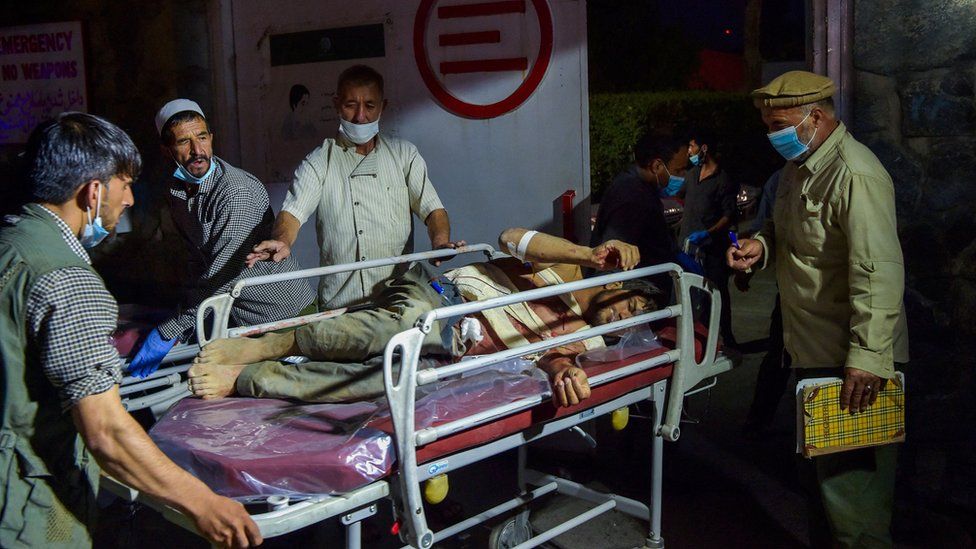 President Joe Biden has promised to hunt down the jihadists behind an attack in Kabul which killed at least 90 people – including 13 US troops.

Mr Biden warned the US would “not forgive” the perpetrators.

The twin blasts, claimed by a local branch of Islamic State (IS), tore through crowds of men, women and children outside Kabul airport.

They were hoping to join the 100,000 people airlifted out of Afghanistan since it fell to Taliban militants.

There had been repeated warnings that an attack was likely, but it either did not reach or did not deter those waiting.

US troops in control of Kabul international airport have been facilitating the evacuation of foreign nationals and Afghans who had been working with foreign missions.

They have been aiming to complete this within a 31 August deadline for US forces to leave under an agreement with the Taliban.

A number of European countries have already announced the end of their evacuation plans. The UK said on Friday it would not be processing any more applications, acknowledging it was leaving people behind.

Speaking hours after Thursday’s attack, Mr Biden vowed to complete the evacuation mission, adding “we will not be deterred by terrorists”.

He said the US military had been ordered to attack the leadership, assets and facilities of the group known as Islamic State Khorasan (IS-K), active in Afghanistan and Pakistan.

The group is part of the global IS network, but has local links – even to the Taliban. However, IS-K have accused the Taliban of abandoning the battlefield in favour of a negotiated peace settlement.

The attack at the airport – which began at about 18:00 local time (13:30 GMT) – targeted “translators and collaborators with the American army”, the jihadist group said.

The first blast happened near the Abbey Gate, where US and British forces have been checking people entering the airport, followed by a second minutes later at a hotel which was used by British officials to process Afghans hoping to travel to the UK.

Survivors described the horror in the wake of the attack, with one saying they saw “bodies and body parts flying in the air like a tornado blowing plastic bags”.

Another recounted how they tried to take an injured baby to safety, only for the child to die in their arms.

Hospitals were quickly overwhelmed with the injured. Alberto Zanin, the medical director of one facility run by Italian NGO Emergency, described on Twitter how the victims “could not speak, many were terrified, their eyes totally lost in emptiness, their gaze blank”.

Thirteen US troops were among those killed – the first US military casualties in Afghanistan since February 2020.

Mr Biden said the troops who had died “were heroes who were on a selfless mission to save the lives of others”.

The head of US Central Command, Gen Frank McKenzie, said the threat from IS-K remained high and US forces were working with Taliban to try to stop further attacks and that the Taliban had already prevented many.

But the attack is likely to significantly complicate the evacuation effort ahead of the deadline.

There are currently 5,800 US troops on the ground at Kabul airport with a further 1,000 UK troops also there.

About 5,000 people are waiting at the airport and many more are still trying to get through the perimeter checkpoints.

A number of countries, including Canada, Belgium, the Netherlands and Denmark had already stopped their operations.

Turkey has announced that its troops, who had been providing security at the airport for six years, were withdrawing.