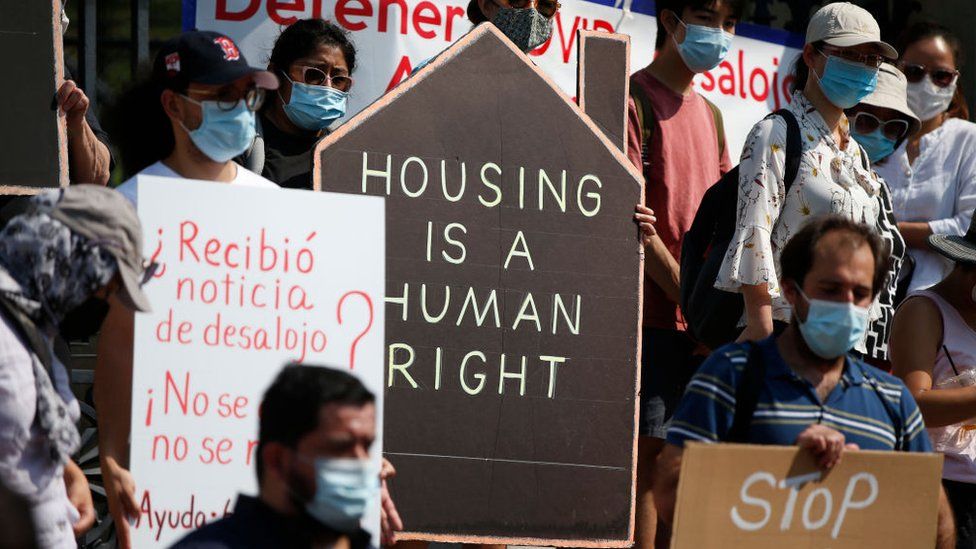 The US Supreme Court has ruled to allow evictions to resume across the country.

It blocked the Biden administration’s Covid-related moratorium on evictions, which would have extended protections to millions of Americans.

The moratorium was first put in place a year ago to combat homelessness during the Covid pandemic.

All three liberal judges dissented from the ruling, while all six conservatives ruled in favour of blocking the extension.

“If a federally imposed eviction moratorium is to continue, Congress must specifically authorize it,” the court wrote in an unsigned opinion released on Thursday evening.

The Biden administration had argued that the moratorium was needed due to a spike in Covid cases.

“The trajectory of the pandemic has since changed – unexpectedly, dramatically and for the worse,” the Biden administration said in a brief. “As of August 19, 2021, the seven-day average of daily new cases is 130,926, nearly a ten-fold increase over the rate when this court ruled”.

But extension opponents said many landlords are struggling with their mortgage repayments without regular rent money.

White House press secretary Jen Psaki said in a statement that the Biden administration is disappointed by the Supreme Court’s ruling.

“Families will face the painful impact of evictions and communities across the country will face greater risk of exposure to Covid-19,” she said.

Ms Psaki added that the White House was calling on local and state courts, landlords and government agencies to “act urgently” to prevent evictions. To help renters, the Department of the Treasury on Wednesday also announced a reduction in paperwork requirements to receive emergency rental assistance. The department warned that state and local governments that fail to provide relief to at-risk renters may receive less funding than jurisdictions that do.

According to August US Census bureau data, 3.5 million Americans said they face eviction in the next two months.

Some states such as New York and California have extended their own moratoriums while some judges said they would make use of eviction diversion programmes to avoid people being made homeless as the pandemic intensifies, the New York Times reports.