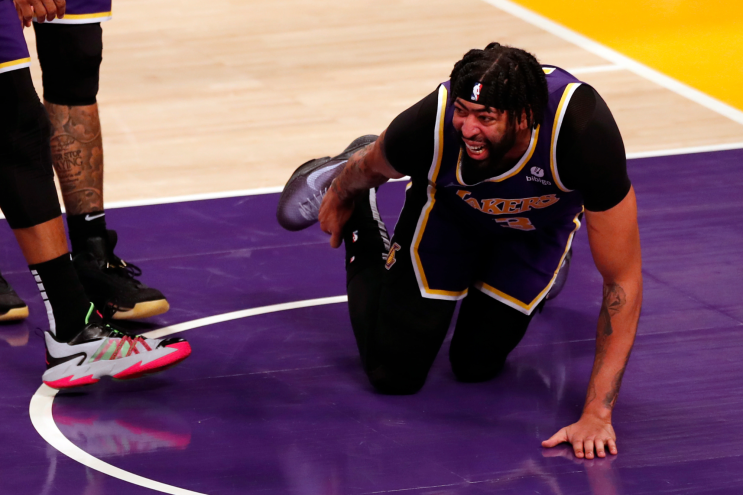 Anthony Davis has missed over one-third of the Los Angeles Lakers games this season due to injuries. It looks like he will miss more time after another setback.

Davis sprained his right ankle during the second quarter of Wednesday night’s game against the Utah Jazz. He was down on the court for several minutes.

The Lakers said an X-ray on Davis’ ankle was negative and that he would receive further treatment during the upcoming All-Star break. Coach Frank Vogel said after the Lakers’ 106-101 win that Davis would get an MRI on Thursday to assess the severity of the sprain.

“He was shaking his head about everything. He was frustrated because like it looks like he is going to miss some time,” said Vogel, who saw Davis in the locker room during halftime.

The Lakers’ next game isn’t until Feb. 25 against the LA Clippers.
Davis had scored 17 points in 17 minutes before he went up to catch a lob pass and came down on Rudy Gobert’s heel with 3 minutes remaining in the first half. Davis was unable to put any weight on his right foot and had to be helped off the court by teammates DeAndre Jordan and Dwight Howard into the locker room.

“It was sickening to see AD go down in that fashion. It was an unfortunate play,” LeBron James said. “The good thing is he will be better a week from today when we all come back. He’ll be back as soon as he can. Nothing to rush.”

Davis is averaging 23.1 points and 9.7 rebounds in 37 games. He has been out of the lineup for 21 games, including 17 most of last month due to a knee injury. He was averaging 22.6 points and 9.3 rebounds in the 10 games since his return, including four where he had a double-double.
Wednesday also marked only the sixth time since Dec. 15 that Davis and James had been in the starting lineup together.

It is another bad break for the Lakers. Despite beating Utah to snap a three-game losing streak, Los Angeles (27-31) goes into the break in ninth place in the Western Conference. The Lakers are six games behind Denver for the sixth seed, which would help them avoid having to participate in the pay-in tournament for the second straight season.

“We have to win as many games as we can and believe in who we have,” Vogel said. “We have a deep team. Certain guys may be in and out of the rotation but everyone is going to be needed.”

Long-term contracts could see Aussie players move away from IPL