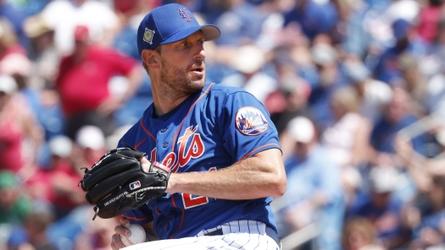 Max Scherzer’s fate to start the season will largely depend upon how he fares in a bullpen session Tuesday.

A day after the right-hander was scratched from a spring training start because of hamstring discomfort, manager Buck Showalter on Sunday indicated that Scherzer is still potentially in the equation for the Mets’ first turn through the rotation.

But it’s unclear if Showalter would feel comfortable enough to pitch Scherzer in Thursday’s opener in Washington or if he might be pushed back at least one day. Originally, Showalter planned to give Jacob deGrom the start in the opener. But the right-hander will start the season on the injured list with a stress reaction on his right scapula.

Showalter has indicated he wants to keep his other starting pitchers — Chris Bassitt, Carlos Carrasco and Taijuan Walker — in their original alignment. Among the possibilities is deGrom’s replacement (potentially Tylor Megill, David Peterson or Trevor Williams) will start the opener.
Scherzer has called his hamstring discomfort a “hiccup” and indicated he wasn’t too concerned about the possibility of an extended absence.

“Opening Day is special,” Bassitt said. “But nobody is going to be talking about Opening Day in about seven months. Just do what is best for the club and I think Buck is doing a great job of that.”
Bassitt also expressed optimism the Mets can survive deGrom’s absence for a significant stretch.

“We’ll be all right,” Bassitt said. “Max is fine. Jake obviously needs some time, but if we are that reliant on deGrom, I know he’s the best pitcher in the world, but it’s OK. It will be all right.”
The right-hander allowed four earned runs on six hits with two walks and six strikeouts to finish the Grapefruit League with a 3.72 ERA.

Williams, who is a candidate to take deGrom’s rotation spot, pitched three shutout innings in relief.
The Mets played their final game at Clover Park this spring. They face the Astros and Nationals on the road the next two days and will work out on Wednesday in Washington.